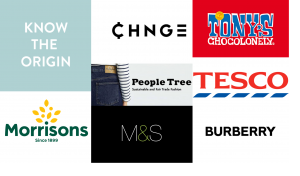 Today, out of the 45.8 million people trapped in slavery globally, an estimated 70% of which are forced into bonded labour. Slavery is an extremely deep-rooted infestation of society. It consists of a complex global network of criminals, exchanging, buying, selling and trading humans; forcing them to work in factories, farms, brothels and building sites.

And so, slavery exists in nearly every single item we use on a day to day basis. From our clothes, jewellery and the foods we eat to the furniture in our homes, the pencil case you use at school and the towel you use after a shower, slavery exists everywhere. Maybe even the phone or tablet you’re reading this from or the clothes you’ve got on now – these may contain slavery.

Each item we use today has been on a journey. Let’s take a simple cotton t-shirt for example. In order to make the final product of a cotton t-shirt or any object, there are a number of process which have to be carried out – this is called the supply chain of a product. To make a cotton t-shirt, the cotton has to be picked, separated from the seeds, spun, treated (bleached, dyed etc), cut, sewn, printed, packaged and then finally, delivered to a store where you can purchase it from. Wow! That’s a long supply chain; for some goods the supply chain is even longer than that.

At any point in that supply chain, slave labour could be occurring. Whether it be on the farm picking the cotton or in the factory being forced to work endless hours cutting and sewing slavery could be occurring. Moreover, due to the fact that a company will use various suppliers (due to prices of manufacturing) in order to source materials or labour for their final product, it creates a vast network making it harder to spot if and where slavery is occurring. Companies have to take the time to go through all aspects of their supply chains and ensure with suppliers that there is no slavery occurring.

I have heard and read many harrowing stories about people, children, women and men being forced to work in the harshest in fields and factories. One of the most disturbing stories I came across was on the International Justice Mission’s (IJM) website; a story told by two children, Suriya and his cousin Vijay.

Suriya and Vijay were 11 years old when a man offered his parents an advance of $15 for him and his cousin to work in a factory with a steady income. At the time, Suriya and his family were living in extreme poverty and so, it would be foolish to let this opportunity slide. However, little did they know that they would be taken 900 miles away to a candy factory where they were forced to work excruciatingly long 16-hour days. 5 years later, after being emotionally and physically abused, Vijay escaped and returned with harrowing stories. He told IJM of how there were more children just like him working in the same factory and how they were beaten if they did something wrong. On one occasion, Vijay accidentally added a larger amount of slat into the recipe than usual, in turn, the factory owner’s wife “beat Vijay with an iron rod and scalded his legs with hot oil”. Vijay still has those scars today. The children in that factory are terrified. Fear is what traffickers use to control their victims. Traffickers threaten victims’ families, torture them and starve them. In Vijay’s case, the factory owner called Suriya’s parents and told them that if Vijay didn’t return to the factory, they would kill Suriya.

It may seem that this is something that we can’t do anything about – it’s something that at first, when I learnt of slavery, I felt helpless about. But I discovered that you and I as consumers, we have POWER. We have the power to change, to reform to criticise and put pressure on companies to become transparent about slavery in their supply chains.

If you see a company that has been accused of using child labour or slavery – write to them.

If you see a company that is avoiding publishing a human rights or slavery statement – call them out on social media.

If you see a company that has a supply chain – challenge them, put pressure on them as a consumer to be transparent. Boycott their product!

If companies don’t have consumers or if consumers have a negative attitude towards that company – will that company succeed? No. Ultimately, when you keep pressing that company, it will go over a tipping point and give into your demands. It has proven to work in the past too.

But as well as calling out companies that aren’t doing much to tackle slavery, we have to support those who are actively fighting the issue whilst being transparent about the work they are doing.

And there’s another whole new market out on the world wide web for ethical clothing. There are a large number of fashionable, ethical brands that people of all ages can buy from. There is a misconception that buying ethically only means clothing – but ethical stores offer clothes, water bottles, towels, pencil cases and so many more items we use on a day-to-day basis. Plus, everything you buy from these stores have no slavery whatsoever! Buying from ethical stores is much cooler than you think!

Here are a list of a number of ethical companies and companies that are taking steps to tackle slavery in their supply chains:

Here are just a fraction of companies to boycott, write to and put pressure on because they are overlooking the issue of slavery and exploiting people for cheap labour:

Slavery, the exploitation of people just like you and I by companies across the globe, even on your high-street, remains the greatest human rights issue of our time. The only way we can tackle this type of slavery in the supply chains of goods and services is if we all come together, make amends in our own lives and then collectively challenge companies to tackle the issue and become transparent!